I will be speaking on two panels at ConFusion 2018! Here is my schedule:

TITLE: Poetry in Novels
DESCRIPTION: Carroll’s Alice in Wonderland and Through The Looking Glass include lengthy poems, placing them in a long tradition of long-form fiction that incorporates poetry into the work. How does writing poems for prose fiction differ from writing poems that stand alone? What distinct techniques does it require? Where do poems within stories exist in the landscape of genre poetry today?
PANELISTS: Amal El-Mohtar, Clif Flynt, Jeff Pryor, Josef Matulich, John Winkelman, Mari Ness
ROOM: Isle Royale
DAY/TIME: Sunday, January 21, 10:00 – 10:50 am

TITLE: Analogue Media in the Digital Age
DESCRIPTION: Paper, vinyl, and film, oh my! What are the unique advantages to analogue media, and what’s just a deeply ingrained sense of how media “should” be? Is it not a book without the paper smell, or a song without the soft crackle of a needle on vinyl?
PANELISTS: David Klecha, Gail Cross, John Winkelman
ROOM: Petoskey
DAY/TIME: Sunday, January 21, 1:00 – 1:50 pm

I will, of course, vastly over-think and over-research these topics over the next ten days, and will therefore post my notes.

In Sacramento for work for the week. In the spirit of John Scalzi, here is the view from my hotel window. 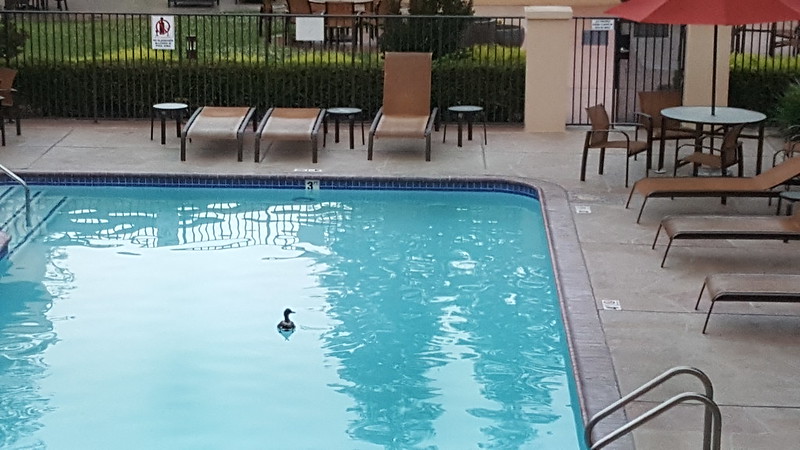 Before I dive into the mosh pit of American and worldwide events I feel it is important to state my starting position. This will provide context for my positions on topics like politics, religion, economics, environmentalism, and so on.

I am a straight Caucasian male. I was born in June of 1969, which makes me a member of Generation X. Politically, I am a hodge-podge of liberal, socialist, anarchist and Green. Religiously I am predominantly Buddhist, with a strong dash of Taoism and sprinklings of Eastern Orthodox mysticism. I have a college degree and a good job as a programmer. My life is stable enough for me to occasionally feel genuinely bored.

As a straight white dude I am overwhelmingly on the side of hegemony in the United States. Every benefit it is possible to accrue simply by being born white and straight and a dude, I have accrued. In the past twenty years and eight jobs I have only *really* had to fill out a resume once. The only way I could more closely hew to the current odious version of the American Dream would be for me to be conservative and Christian.

I recognize how privileged my life is, and how little I have had to work, comparatively, to make it so. The system is set up specifically for people like me, and specifically against people who are not like me. And that fact nauseates me.

As a nerdy kid in a small farm town I was bullied regularly. Not badly, compared to the suicide-inducing standards of today, but consistently. That led directly to my lifelong practice of martial arts, and to my lifelong–and steadily increasing–hatred of bullies and bullying. For the purpose of any discussion along those lines, I will define bullying simply as punching down from a position of strength. And since this is my blog, I will be the sole determiner in these discussions as to what constitutes punching down.

To go along with that definition, I also have three general rules or guidelines or aphorisms that I try to keep front-and-center:

I agree that the third point is incongruous with the first two. So be it. I contain multitudes. And sometimes pie.

Events good and bad happen all the time and follow no particular cosmic order, but the calendar allows us to group them into convenient clusters around which we can allow narrative to congeal. A great many influential artists of all genres passed away during 2016. They were perhaps particularly influential for people my age because the artists were at the height of their power when we fans were at our most receptive ages. I became a fan of David Bowie, Prince, Umberto Eco, Jim Harrison, Elie Wiesel, Carrie Fisher, Harper Lee and Leonard Cohen all in about a ten year period.

This is a small sampling of the “notable deaths” of 2016. These were the ones who had the greatest emotion impact for me. Though the circumstances of their deaths varied, none of them were young, and none of them died in any unusual fashion. The world was better for their contributions, and though I never met any of them–though Jim Harrison glared at me briefly at a book signing in 2009–I miss their presence in the world.

2016 sucked, and I am glad it is over. Politically it marked a gigantic step backward as bigots and bullies and dominionists convinced foolish people to vote for a fool. And the fool will be president for the next four years, or until he is impeached or otherwise loses his office. I would cheer wholeheartedly at the prospect of Trump losing the office before his term is up, were it not for the fact that Pence is markedly worse. All possible forms of Christian dominionist rule of this country are no different from fascism.

It is pure coincidence that all of these notable people died in the same year that Donald Trump was elected. But they did all happen in a single calendar year, and the narrative that has built around 2016 is that it sucked. Hardcore. If our calendar went from, say, November 1 to October 31, we could say that 2016 sucked and then 2017 got worse in its first week. It would not change the level of suckage. And since one of the first notable planned events for 2017 is Trump’s inauguration, we can safely assume that 2017 is going to totally blow chunks.

Pinning the bad mojo on 2016 is voodoo of a sort. When 2016 recedes into the past it will take its load of shit with it, and leave the slate clear for a fresh start in 2017. We are human beings. Going with the flow of narrative is what gives us meaning in our day to day lives. If 2016 ending means things will get better, then so be it. There’s a reason placebos work so well. That they are placebos does not diminish their importance or their potency.

With about six hours remaining in 2016 (EST) and the positive feedback loop of zeitgeist in full effect, now would be an excellent time to make some New Year’s resolutions. For me, it will be a pledge–to the best of my ability I will protect those who are being punched down upon. And if you are on the side of hegemony on any particular issue, and are punching down on those not, I will do my level best to make sure you have a very bad time of it.