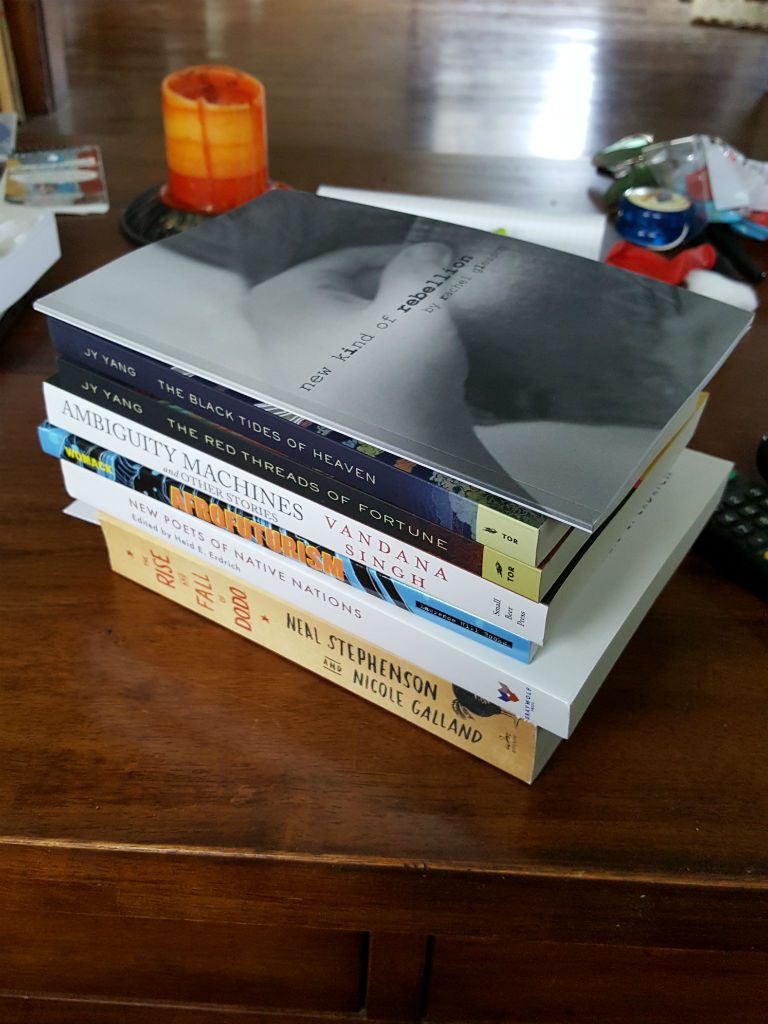 A small bonus from work allowed me to pick up a few books which have been on my want list for some time. Yeah, I have eclectic reading tastes. From top to bottom, they are: New Kind of Rebellion, by Rachel Gleason; The Black Tides of Heaven and The Red Threads of Fortune by JY Yang; Ambiguity Machines by Vandana Singh; Afrofuturism by Ytasha L. Womack; New Poets of Native Nations, edited by Heid E. Erdrich; and The Rise and Fall of D.O.D.O. by Neal Stephenson and Nicole Galland.

DESCRIPTION: “Carroll’s Alice in Wonderland and Through The Looking Glass include lengthy poems, placing them in a long tradition of long-form fiction that incorporates poetry into the work. How does writing poems for prose fiction differ from writing poems that stand alone? What distinct techniques does it require? Where do poems within stories exist in the landscape of genre poetry today?”

Boy, did I over-think this one–in part because I love poetry, and in part because Amal El-Mohtar was also on the panel and I wanted to bring my “A” game. In the stump of the old tree, where the heart has rotted out, there is a hole the length of a man’s arm, and a dank pool at the bottom of it where the rain gathers, and the old leaves turn into lacy skeletons. But do not put your hand down to see, because

in the stumps of old trees, where the hearts have rotted out, there are holes the length of a man’s arm, and dank pools at the bottom where the rain gathers and old leaves turn to lace, and the beak of a dead bird gapes like a trap. But do not put your hand down to see, because

in the stumps of old trees with rotten hearts, where the rain gathers and the laced leaves and the dead bird like a trap, there are holes the length of a man’s arm, and in every crevice of the rotten wood grow weasel’s eyes like molluscs, their lids open and shut with the tide. But do not put your hand down to see, because

in the stumps of old trees where the rain gathers and the trapped leaves and the beak and the laced weasel’s eyes, there are holes the length of a man’s arm, and at the bottom a sodden bible written in the language of rooks. But do not put your hand down to see, because

in the stumps of old trees where the hearts have rotted out there are holes the length of a man’s arm where the weasels are trapped and the letters of the rook language are laced on the sodden leaves, and at the bottom there is a man’s arm. But do not put your hand down to see, because

in the stumps of old trees where the hearts have rotted out there are deep holes and dank pools where the rain gathers, and if you ever put your hand down to see, you can wipe it in the sharp grass till it bleeds, but you’ll never want to eat with it again.

In line with my stated goals for the the Year of the Dog, I have given myself a couple of personal projects.

Every day this year, I will think up an idea for a game. Computer game, board game, card game, logic puzzle… all are fair game. Heh.

And every day this year, I will write a poem. Haiku, sonnet, blank verse, random gibberish…good or not, it will help me get my head back into the space it was many years ago, before I began spending so much time staring at computers.

If I come up with anything particularly interesting or good, I will post it here. And if one of my ideas turns into an actual game, I will also post it here.

Here is an example computer game which I came up with today:

You are stationed on an asteroid in space, in the middle of an ion cloud. Enemies are approaching! Your only defense is a (bottomless) crate of capacitors and a, uh, capacitor launcher. When the capacitor reaches a predetermined location, it discharges and electricity arcs between your base and the capacitor, frying anything which gets in the way.

Gameplay is as follows:
Your base is in the center of the screen.
Enemies drift around out in space, and occasionally spiral in to ram you.
Click the screen to launch a capacitor from your base to the area you just clicked.
When the capacitor reaches that point, electricity discharges in a straight line between the base and the capacitor.
Any Enemy touched by the electricity is destroyed.
Powerups are occasionally released by dead enemies, and drift toward your base.
If you shoot the powerup it is destroyed

I don’t think this game would be too difficult to program. I just need to sit down and program it.